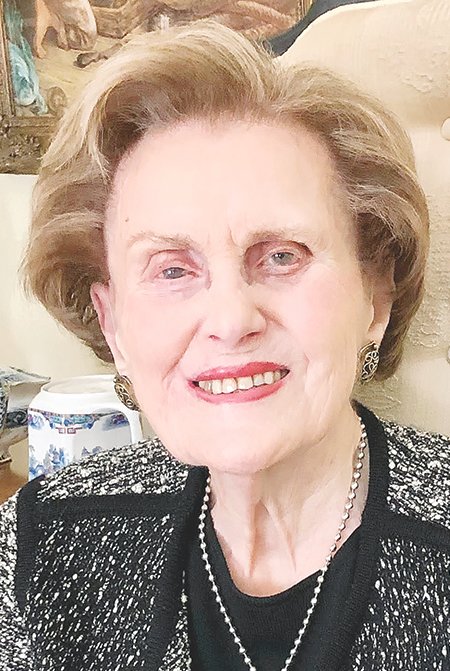 Posted Monday, November 14, 2022 11:31 am
Rebecca May passed away on November 11, 2022, 6 days before her 104th birthday.
Becky was a beloved mother, aunt, grandmother, great-grandmother, and friend. She was born Rebecca Leibovici in Montgomery on November 17, 1918, six days after the signing of the World War I Armistice. She married Ike (Isaac) May on October 23, 1938 and together they gave much of their 62 years together to family and community. Becky and Ike had seven children, Linda, Norma, Marlene, Fred, Joel, Gloria and Robert and taught them to love one another, to be compassionate, to strive to be impactful in the world, and devotedly give back to our communities.
Becky was a member of Temple Emanuel and was the oldest member of Musgrove Country Club.   She was always active in making Jasper a better place, including serving as president of the PTA, supporting the Bankhead House, as well as helping make the Hope Clinic and valued organization to serve women in our community.
Becky was a guiding light to all who knew her. She was wise and beautiful from the inside out. For many decades, she became matriarch not only to her large family, but to so many whose lives she touched.
Becky is predeceased by her devoted husband, Ike; her daughter, Linda May Horwitz, and son-in-law, Donald Horwitz.
She is survived by children Norma and Sandy Goldberg, Marlene and Ricky Beringer, Fred and Susan May, Joel May and Kevin Kirby, Gloria and Dr. Paul Sternberg, and Robert and Stacy May; her grandchildren, Jan and Dennis Williams, Jeff Horwitz, Michael and Lydia Beringer, Leigh Anne and David Nomberg, Stephanie and Michael Beasley, Ryan May, Matthew Sternberg and Lizzie Amundsen, Zach Sternberg, Austin May, and Benjamin May; great-grandchildren, Emma and Chloe Horwitz, George and Will Beringer, Lillie and Ellis Nomberg, Zoey Borden, Ella and Becca Beasley, Evan Foltz, and Taylor and Christopher Reynolds.
The family is in deep appreciation for the care given by Dionne Greenwood,  Evon East, Tammy Knight, Kathy Waldrop, April Oliver, Christy Miller, and Angela Lacy of Southeast Hospice. In addition, we thank Leon Harton and Judy Pierce.
Services were held at Kilgore Funeral Home on Sunday,November 13 at 1 p.m. In lieu of flowers, the family asks that donations be directed to Walker Area Community Foundation (wacf.org) and Southeast Hospice (southeasthospicenetwork.com).
Kilgore-Green Funeral Home, Jasper; 205-384-9503
February 6, 2023
Welcome! Login | Register for free access
Subscribe | Advanced search