Will Bama fans cheer for an Oklahoma quarterback?

Jalen Hurts will forever be a legend in

Tuscaloosa. The 2016 SEC Offensive Player of the Year and Freshman of

This item is available in full to subscribers.

Will Bama fans cheer for an Oklahoma quarterback?

Jalen Hurts celebrates after scoring the go-ahead touchdown against Georgia in the 2018 SEC Championship. Those running skills are now with the Oklahoma Sooners.
Lee Walls
Posted Wednesday, July 10, 2019 11:24 am
By JEFFERY WINBORNE

Jalen Hurts will forever be a legend in Tuscaloosa. The 2016 SEC Offensive Player of the Year and Freshman of the Year led his team to two national championship games with the maturity of a veteran NFL quarterback. But it was in the 2018 SECChampionship that he etched his name into that of folklore at the Capstone.

Hurts lost the starting position to Tua Tagovailoa after the National Championship less than a year prior. Instead of transferring like practically everyone expected, he sat on the bench and watched the Alabama's new sensation put up unthinkable stats game after game. He bided his time and when the moment came, he led the Crimson Tide to their 27th Southeastern Conference Championship.

But for Jalen, the writing was on the wall. Alabama's future lay the in the Hawaiian left hand of Tagovailoa. Alabama fans knew it was coming, like the inevitable arrival of a storm you can't avoid. Jalen Hurts, the freshman sensation turned poised veteran, left Tuscaloosa. 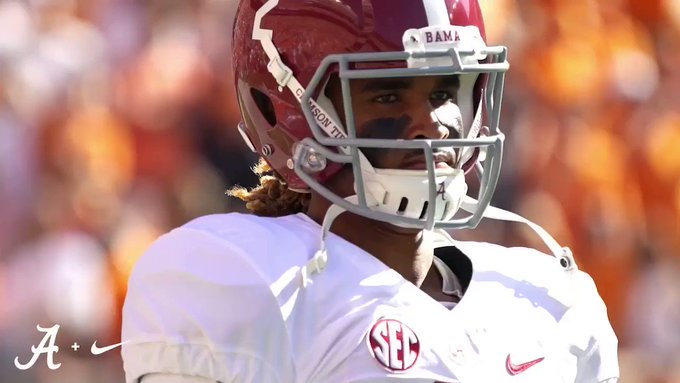 For every pass, every run, every game winner. Thank you Jalen. @JalenHurts #OutworkYesterday#RollTide

They are two modern day Goliaths steeped in tradition, harkening back to the days of Bud Wilkinson and Barry Switzer for one and Paul Bryant for the other. They are Oklahoma and Alabama.

Since their first meeting in the 1963 Orange Bowl, the two programs do not meet the typical definition of a rivalry. They play in different conferences and thus rarely face off against each other, but there is certainly no love loss between the Crimson Tide and the Sooners. From Bob Stoops' anti-SEC rhetoric to the painful loss to Oklahoma in the 2014 Sugar Bowl to Alabama's dominance in the 2018 College Football Playoffs, the modern era of 'Alabama vs Oklahoma has only fed the long-distance hatred.

Kyler Murray was supposed to be the best of the best, beating out Tua Tagovailoa in the Heisman Trophy race. The Sooners were supposed to be destined for a National Championship, their first claimed title since 2000. Unfortunately that unstoppable offense ran into the proverbial brick wall known as Alabama in this past year's Orange Bowl. (Unfortunately for Alabama's brick wall, Clemson brought a wrecking ball known as Trevor Lawrence two weeks later, but that's a different story.)

With the struggles of the Big XII, its widely accepted Alabama and Oklahoma will be meeting more regularly in the CFP and Bama fans are salivating at the thought of continuing to embarrass the “other team in crimson.” But can they bring themselves to cheer against one of their own?

On September 1st, fans will see Jalen Hurts look painfully familiar - white pants with two crimson stripes, crimson helmet and a crimson jersey with bold white numbers. But this time, instead of a subtle circled script “A”, across Hurts chest will be emblazoned with the word “SOONERS”.

For a proud and oftentimes ego-centric fanbase, how will they react to seeing an Alabama legend in a Big XII uniform? How will they respond if he and Tua are against each other in New York for the Heisman Trophy? But perhaps the most important question is if the Sooners and Crimson Tide meet again in the College Football Playoff and Jalen Hurts sprints around the Alabama defense into the endzone, wearing crimson and white no less, do they have it in them to hate one of their own?

One thing is for certain. Jalen Hurts will always be Alabama for those who say “Roll Tide”. And while they might not admit it nor bring themselves to utter “Boomer Sooner”, they will quietly watch the Oklahoma quarterback with a smile this season and quietly say to themselves, “Go'on Jalen!”